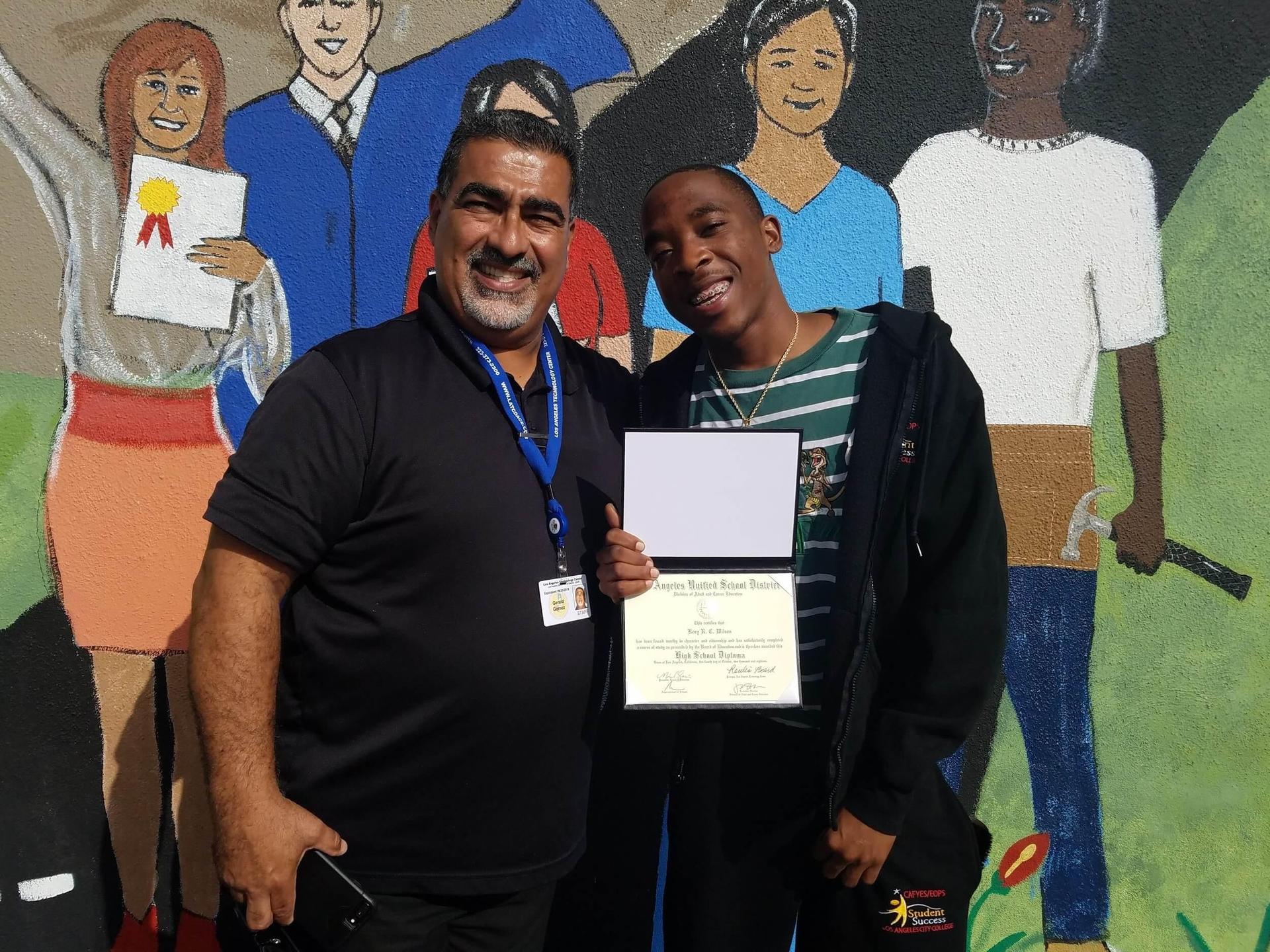 “Everybody Starts at Different Times – You Will Have Your Time to Shine.”

When I was 15 and living with my mom, I got into a fight with her husband and she kicked me out of the house. I was couch surfing with different people then and I even ran away for awhile and was on my own, but I never stopped going to school. At that time, someone gave me the opportunity to make some money selling weed, and then I got caught and kicked out of school. The police took me and held me for many hours, and when no one came to pick me up, I was placed in the foster care system. A social worker picked me up from the station, and they had to take me to what I think was a hospital just so I could have a bed to sleep in that night.

The next day, a potential foster mom, “Ms. Pat”, interviewed me, and the day after that, she took me to her house. I was new to trying to do better. She took me to enroll at L.A. High School, but I was still ditching and hanging out with gang members. They pressured me to make a bad decision and take a phone from a girl. I didn’t want to do it, but I did. The police caught me, and then I was placed on probation.

That was like the turning point when I decided that wasn’t what I wanted be doing. Ms. Pat used to talk to me about my decisions, instead of beating me, and since then I’ve been making improvements: in school, who I hang out with, and focusing on bettering myself. When I got off probation, Ms. Pat brought me here to L.A.T.C.”

Kory finished ten high school classes during his time here at L.A. Tech with a 3.0 G.P.A., and his diploma was issued on October 14th!  Everyone at L.A. Tech who has worked with Kory is extremely proud of him. Here are some words about Kory from our staff:

“…True to his word, overcoming some hiccups along the way, Kory has earned his high school diploma and enrolled at Los Angeles City College. I am truly honored to have been a part of his journey! …He is truly a young man that exemplifies what the LATC/AC2T program is about!”- Gerald Gomez, Advisor

“In the beginning, it was like pulling teeth, for Mr. Wilson to turn in any work; there were constant conferences that had to happen for it to finally ‘click’ for him; this diploma was for him, not for us (LA Tech staff). But after all those obstacles, a spark within him turned on and that is when I noticed, ‘He gets it,’ and that was the proud moment when I realized, ‘He finally sees what we see.’ I knew Kory had it in him and all he needed was support. Congratulations, Kory!!!”- Mayra Recinos, Teacher

“I am so proud of him and even though he has graduated, I want him to know that he will always be a part of the LATC family.” – Rocelia Beard, Principal

“…Early on, Kory encountered experiences that required a challenging self examination. He eventually decided to embrace for himself the belief others had about who he could become. …He created high quality work that exceeded all expectations…The truth that some of the most successful people in the world have overcome tremendous obstacles in order to reach their goals will be and is Kory’s truth!”- David Hughes, Teacher

Kory has this to say about his future plans:

“I’ll start by enrolling in one Winter Session class at LACC. My foster brother already attends LACC so he’ll be like a mentor when I start college. I’ll add more classes after Winter Session and major in business administration or financial marketing so I can be my own boss and be an entrepreneur. I plan to transfer to either USC or Berkeley.”

Kory’s advice for other young people who might be struggling with challenges:

“When I have a challenge, I do self-talk. I tell myself, ‘I can do this.’ You’ve got to make sure you believe it yourself- if you don’t believe it yourself, then nobody will believe it!  You’ve got to have that strong desire- a determination- when people say you can’t do it, use that as motivation to prove them wrong! Always have a goal that you want that keeps you motivated. I go hard on everything I do-  I give it 100% or more. Even when things are going bad, you keep pushing forward. You may have one bad day one day, but it will get better as time keeps going. Everybody starts at different times. You will have your time to shine. Always be optimistic; always try to find the good. As long as you’re happy, you’ll always be motivated and feeling good about yourself.”